The railway community celebrated an important milestone in 2017 – the 180th anniversary of Russia’s railway network. The industry dates its history back to October 1837, when the first passenger train embarked on its first journey.

Since that time, Russian railways have witnessed sweeping changes, with hundreds of our trains now connecting cities and countries 24/7 throughout any weather condition.

Two double-decker train pairs were introduced in 2017: No.3/4 Kislovodsk – Moscow (from 2 August) and No.641/642 Rostov – Adler (from 13 September). Currently, 10 pairs of double-decker trains are operating on eight routes over the entire Russian railway network.

The number of daytime express and high-speed trains was also increased.

Contributing to the celebration of Victory in the Great Patriotic War

The Company made every effort to provide journeys as comfortable and festive as possible for each veteran.

Over 1,500 free tickets were issued to disabled veterans and participants of the Great Patriotic War and their travelling companions during the May holidays.

Vintage trains from the WWII period and special trains were also running in a number of regions.

Pursuant to Resolution of the Russian Government No. 1772 On Subsidising Railway Transport Organisation to Compensate for Revenue Shortfalls Caused by Lower Fares for School Students of 10 Years or Older Travelling by Public Rail Transport in Third-Class Sitting or Sleeping Carriages on Long- Distance Trains dated 30 December 2009, travel privileges are available to school students in third-class sleeping and sitting carriages on long- distance trains (both passenger and express) from 1 January to 31 May and 1 September to 31 December. To promote domestic tourism and leisure, FPC initiated a 50% fare discount for children aged 10 through 17 (irrespective of nationality) from 1 June to 31 August in 2016 and 2017

in third- class sleeping and sitting carriages, carriages with open- plan seating on domestic long-distance trains, and 2nd and 3rd class carriages on multiple unit trainsWhen booking an e-ticket, the discount is granted automatically when the “full” fare is checked and details of children aged 10 to 17 are entered..

The Company decided to continue this practice in 2018.

The Company also grants discounts for children aged 10 to 17 during the summer period at its own expense.

A dedicated schedule was prepared for trains running between host cities. A total 42 trains with comfortable and modern carriages were made up to facilitate the additional 262 scheduled journeys.

Day of the Railway Worker 2017

The Achieving the Goal! charity run was held across Russia on 6 August as part of the celebrations for the Day of the Railway Worker. The greatest number of participants gathered in Moscow, at over 7,000. About 300 people represented FPC in Moscow’s charity run, where both adults and children toed the starting line. All funds raised through the event were donated to assist severely ill children. Sports facilities were also available for the festival’s visitors to compete in chess, football, triathlon, volleyball, hockey, table tennis, and other sports.

Year of the Environment

On 14 June 2017, the double-decker train between Moscow and Voronezh was named in honour of Samuil Marshak, a famous poet and author of popular children’s books born in the capital of the Central Black Earth Economic Region.

The Marshak-themed train was in operation throughout the poet’s 130th anniversary celebrations in 2017. The rest area for passengers with children in one of the train’s carriages was decorated with vibrant illustrations and quotations from the author’s works. Adult passengers could read Marshak’s books, while children listened to audio records of his poems.

Vladimir Putin, President of the Russian Federation, visited FPC’s train service depot at the Moscow Kievskaya station as part of the Congress Programme.

During his visit, the President met the FPC team and viewed sample carriages of high-speed and passenger trains traversing the Russian railway network.

On 10 December 2017, the Company opened ticket booking for all domestic long-distance trains and through coaches on domestic routes 90 days prior to the departure date, which can now be booked both at railway ticket offices and through Russian Railways’ official website.

E-tickets reached 45.7% of the total number of seats booked

A 5.5% year-on-year increase in e-ticket sales brought their share in FPC’s total seats booked to 45.7%.

All branded trains, including dining carriages, are provided with bank card terminals.

Over 2,000 carriages have extra sockets for device charging.

Since 19 December 2017, web portals have been offering e-ticket booking and online registration for FPC’s trains on routes to the Kaliningrad Region via Belarus and Lithuania.

The RZD Bonus Family Programme was launched, providing the opportunity to accumulate bonus points of all family members on a joint account.

A 50% discount off ticket prices has been available to reduced mobility passengers as of August 2017.

Every year, FPC increases its number of carriages with dedicated compartments for reduced mobility passengers, which totalled 645 carriages as at the end of 2017. 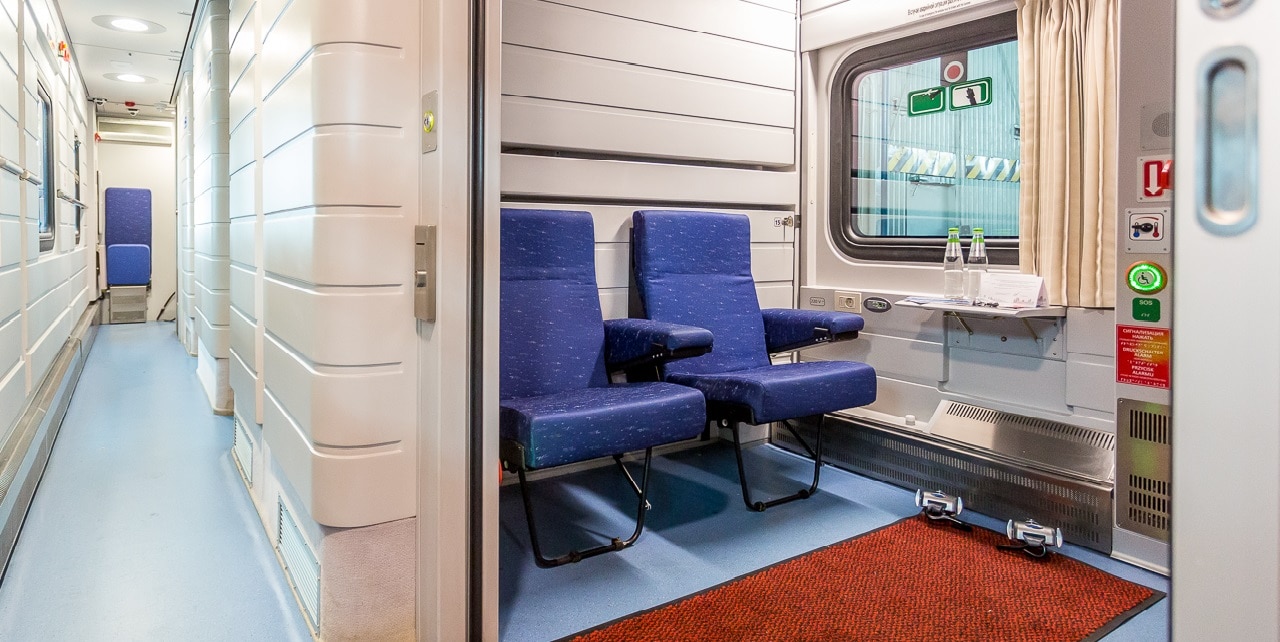